Meet Jackie. The Nevada native and UMich grad turned TV host. Jackie is the wife of recently retired NFL player Jake Long, and mom of two beautiful girls. This talented TV host was destined for show biz from a young age. We love Jackie's spirit (she is the sweetest) and wish her all the best! We'll definitely be tuning in to watch the new show, which sends a positive message regarding pro athletes and their families.  Read Jackie's interview then watch the Season 1 pilot of Jack Of All Tastes at the end! 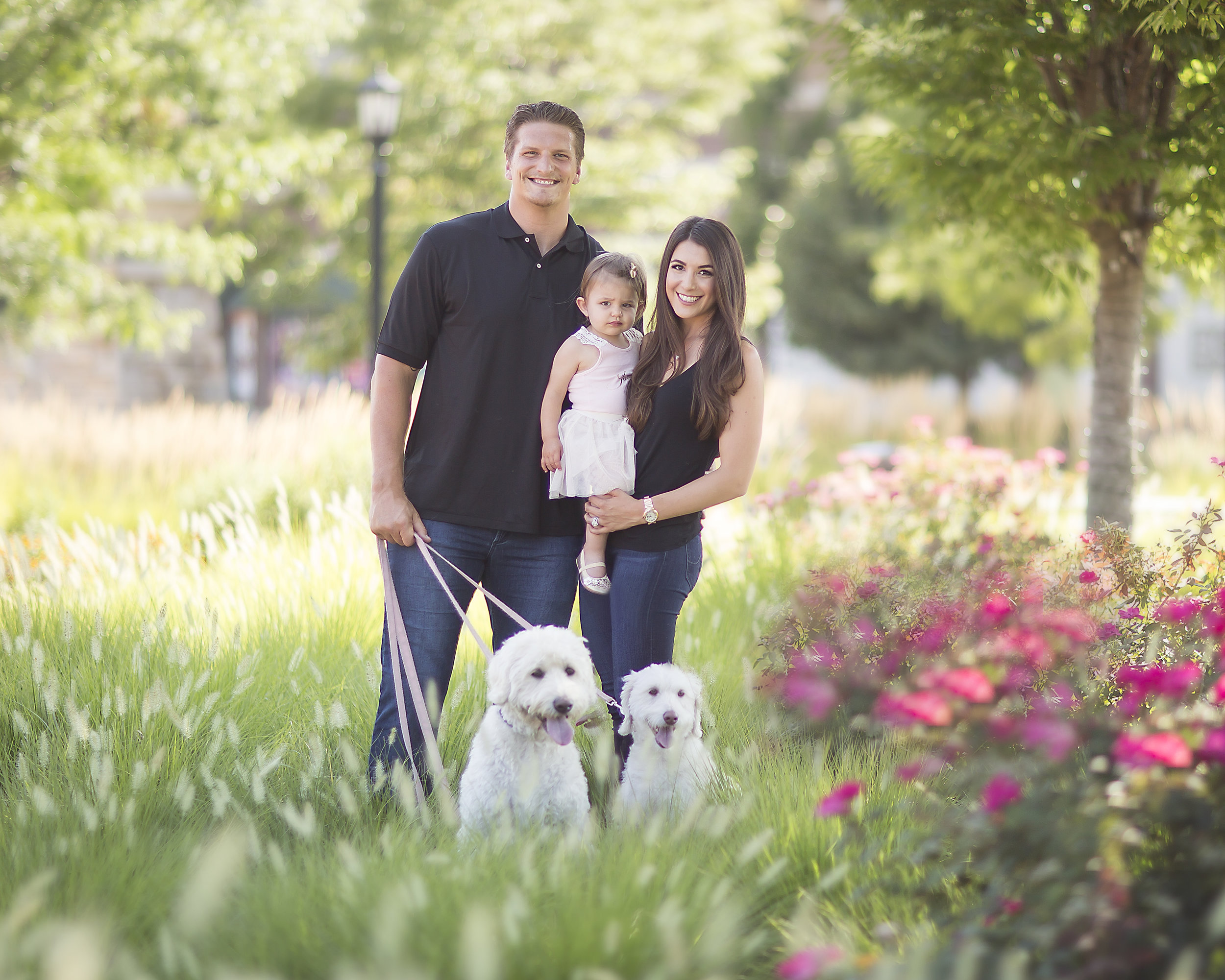 What #hashtag describes you best? #whatweLONGfor-- Its about what makes me happy, what drives me and the little things that go a long way!

Tune in to "Jack Of All Tastes" Season 1 premiering Saturday, September 9, 2018 at 9AM EST on Destination America.

Where are you originally from?

I grew up in Lake Tahoe, Nevada. My high school had less than 250 kids total!  I loved growing up in such a beautiful place where there was always something active to do and participate in. During my sophomore year of high school, I enrolled in a summer program at the University of Michigan and I fell in love with the school and campus. I applied to Michigan early decision, got in, and knew that was where I wanted to be! 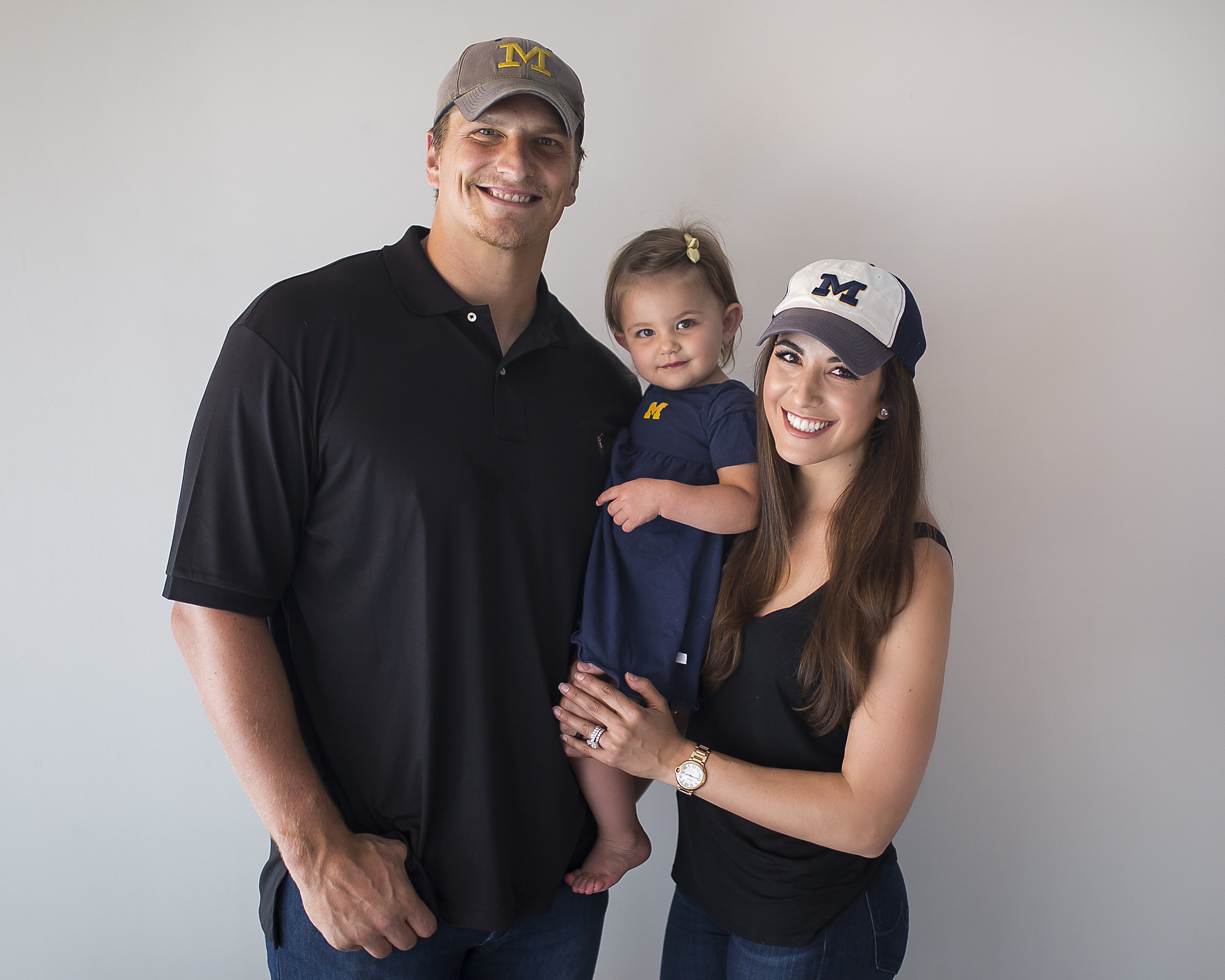 How did you & your husband meet? What’s your love story?

It was the first week of classes during our freshman year and a girlfriend of mine had a class with some of the football players. One day, she invited me to go with her to a party with some of the guys she had met. As a new college student from a small town I was very cautious and told her “we don’t know these boys so don’t go!” Obviously, she told me she was still going so I decided that I had to go with her to make sure she didn’t go alone. It was a house party and since she knew some of the other guys there. Jake and I were left alone on the front porch where we stayed and talked ALL NIGHT. We started dating a little bit after that but it wasn’t anything serious. In our second semester of sophomore year we had Bio 118 together and Jake sat behind me in this big lecture hall…I’ll never forget that class. We had fallen out of touch and I wasn’t interested in him anymore but he confessed his love for me to one of my sorority sisters one day and she of course told me so I thought I’d give him another chance. We talked soon after that, texted on the phone the whole summer and officially started dating in the Fall of 2005. It’s been 12 years total now! 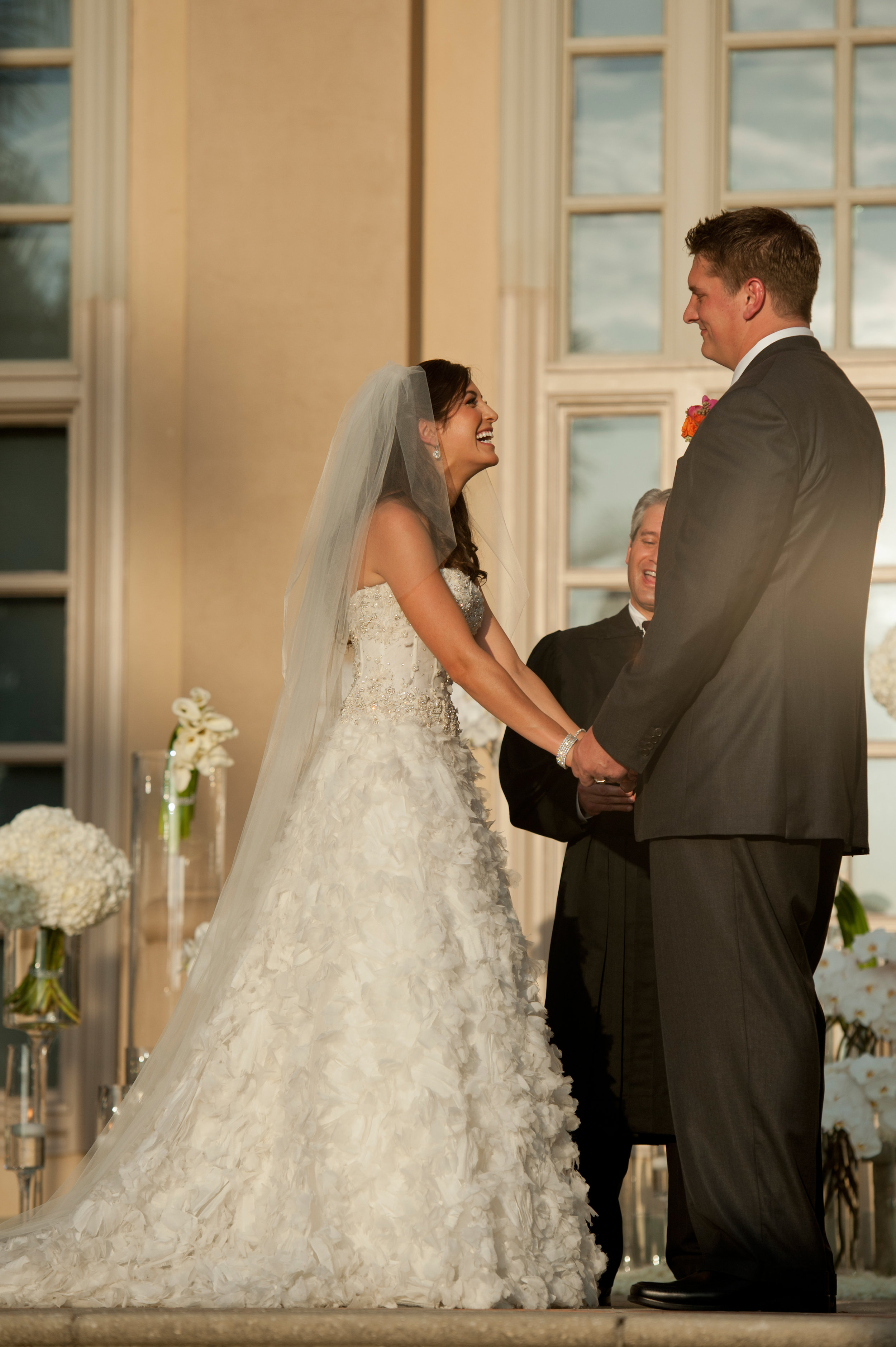 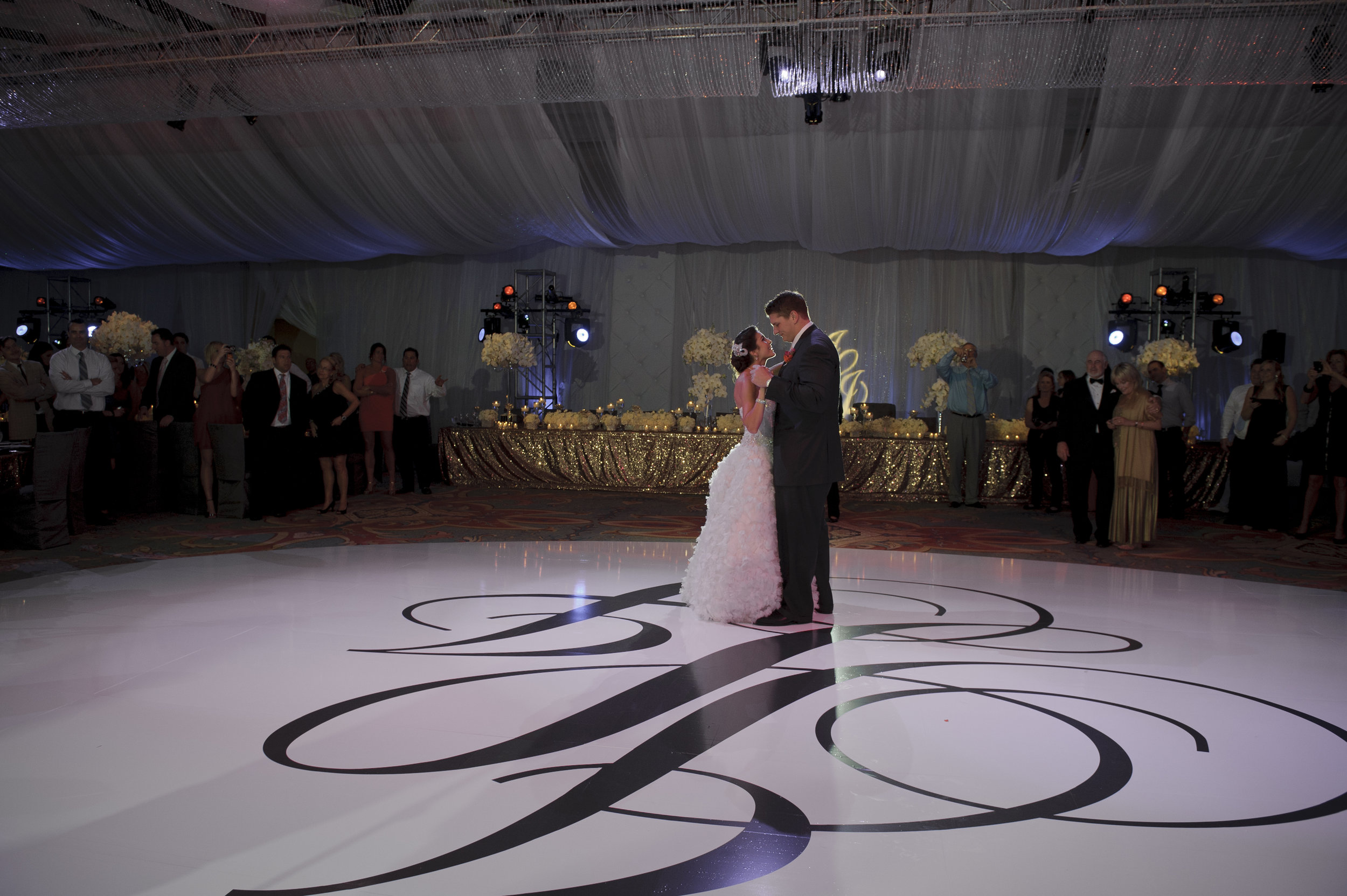 How did you get to where you are now?

Jake and I stayed together after we graduated college and he was drafted #1 to the Miami Dolphins. I moved out to LA to work in film & TV (smaller commercials) but after a year and half of that, he asked me to move to Miami in 2009. I got a job with The Beach Channel as their “food girl” so I covered local restaurants that advertised with the channel. In 2013, we moved to St. Louis with the Rams. As we traveled all over the country for football and made friends from everywhere, we realized that Nashville was a better fit for us long term so we bought an off season home there. Once we knew that Jake was going to retire, we made it our full-time residence.

I have always loved performing but my parents kept me out of it and encouraged sports more. When I went to college, I joined the theater program and had a blast. I got a Psychology degree and equally loved it. It’s interesting how they go together. I have always had fun being on a stage and being in front of a camera.

You are getting ready to premiere a new show, Jack of All Tastes. How did you balance motherhood while filming and traveling?

I think it was harder on me than it was on Juliette. Just being away from her was really tough for me, but she is a really mellow and laid back girl so she goes with the flow. Jake really stepped up and took the lead in supporting and nurturing her while I was gone. Both my mom and his mom split the six weeks I was away so I had so much support from my family. I knew she was in really good hands and I also knew that if I didn’t take this opportunity--it would be harder to encourage her to follow her dreams if I didn’t follow mine.

As moms, we are so hard on ourselves sometimes. 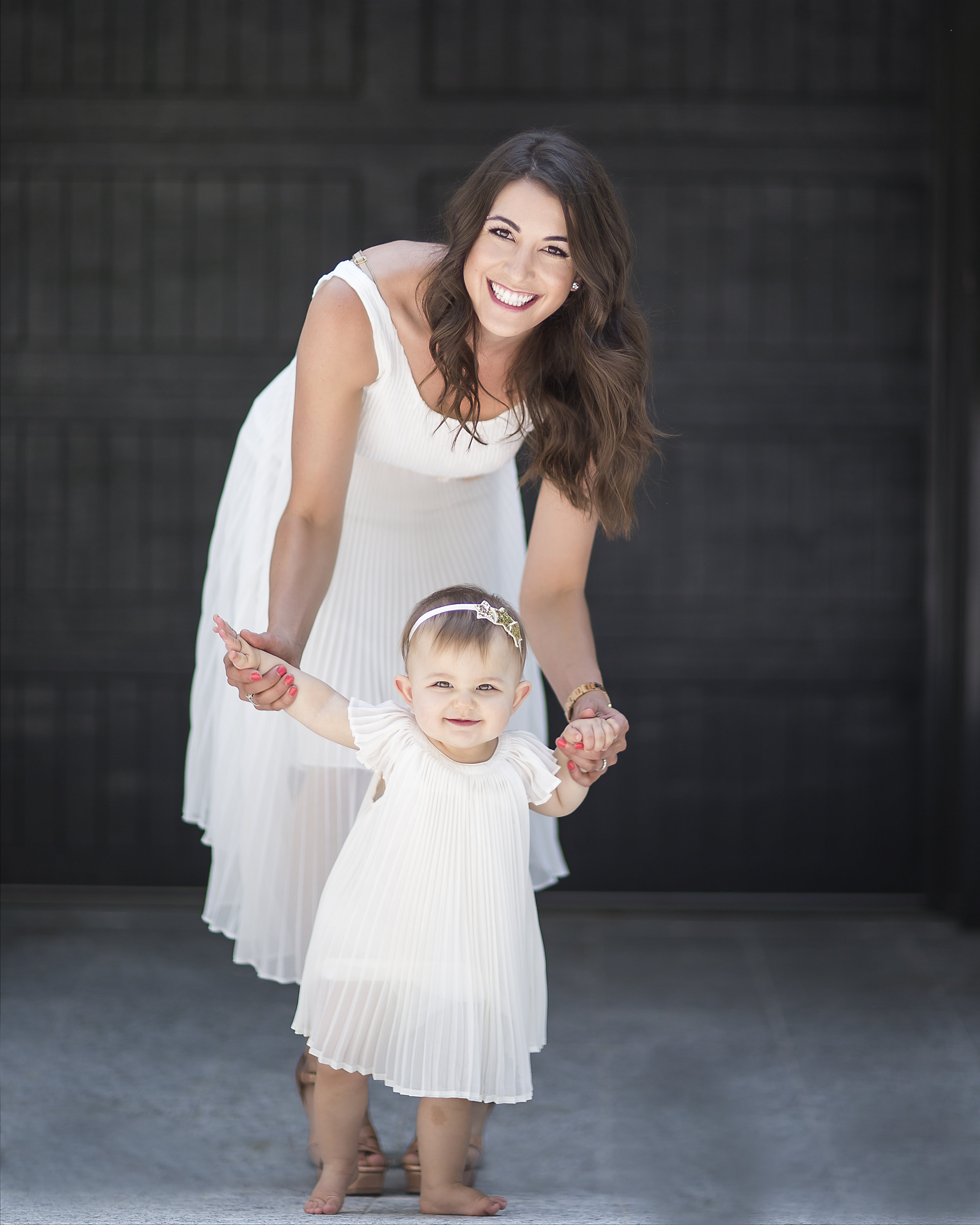 What was your motherhood journey like knowing that while you love being a mother, you also have goals and dreams of your own?

I try to be a role model for Juliette and Josephine and I want to show my daughters that you can be your own person, be creative and make things happens. If I stayed at home full-time I would have been happy but it would be so hard to tell them to “go get it, go do it!” if I hadn’t done it myself. One of the most important things that made it easier was Jake telling me, "You’ve helped me in everything with football, you gave years of your life and dedicated them to my dream… took time and moved all over the country for me so this is your time and it is easy for me to support you.” He wanted my success as much as I wanted his because all of it is OURS.

We are so excited about the show! Tell me how the opportunity landed in your lap?

Thank you so much! The support has been amazing. Accord Productions approached me after working with me on The Beach Channel and said “clients are requesting you and we think you have a lot of potential. Do you have any ideas for a show that we could produce?” I love performing, I love good food and I love sports! So, I said, "Lets eat all over the country at all the restaurants that the players love” and when they asked what we would call it, I already knew and said “Jack of All Tastes!” 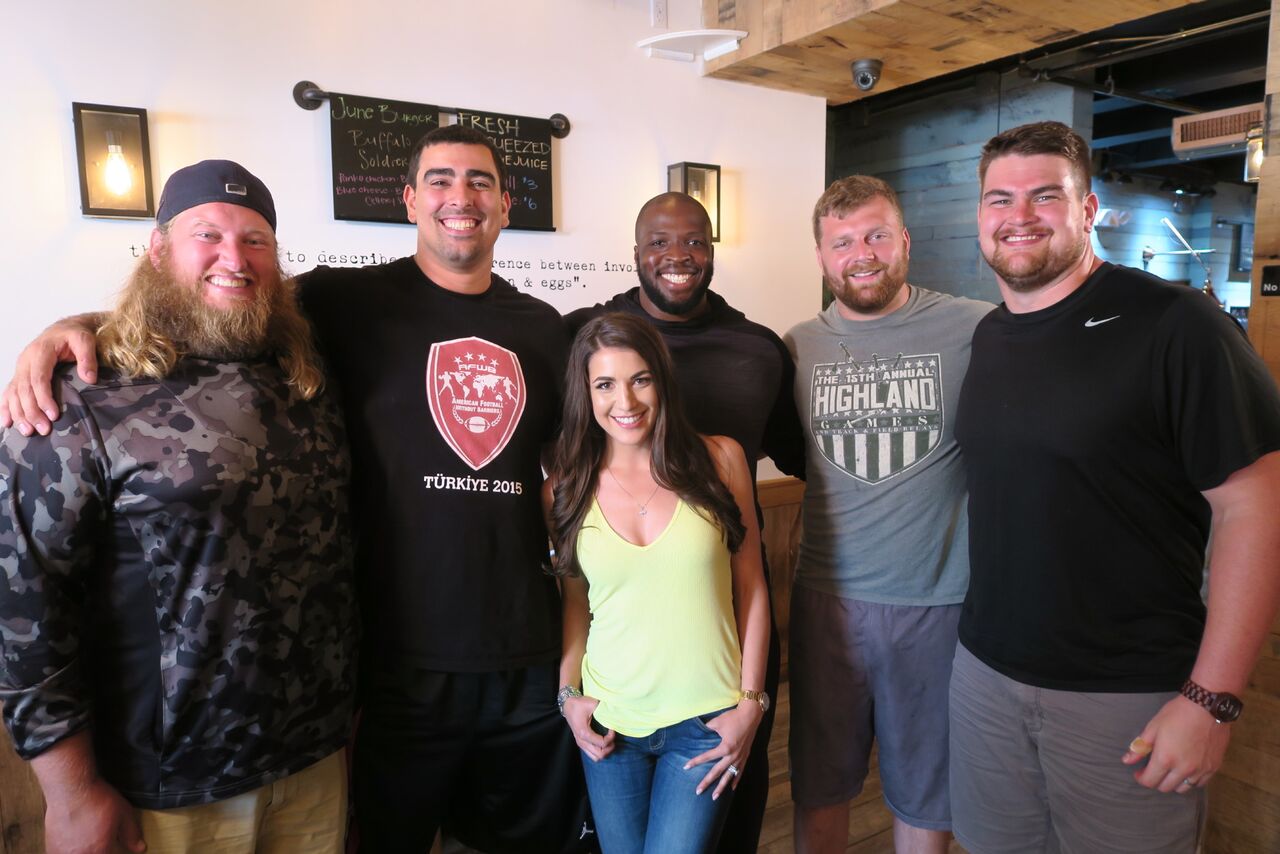 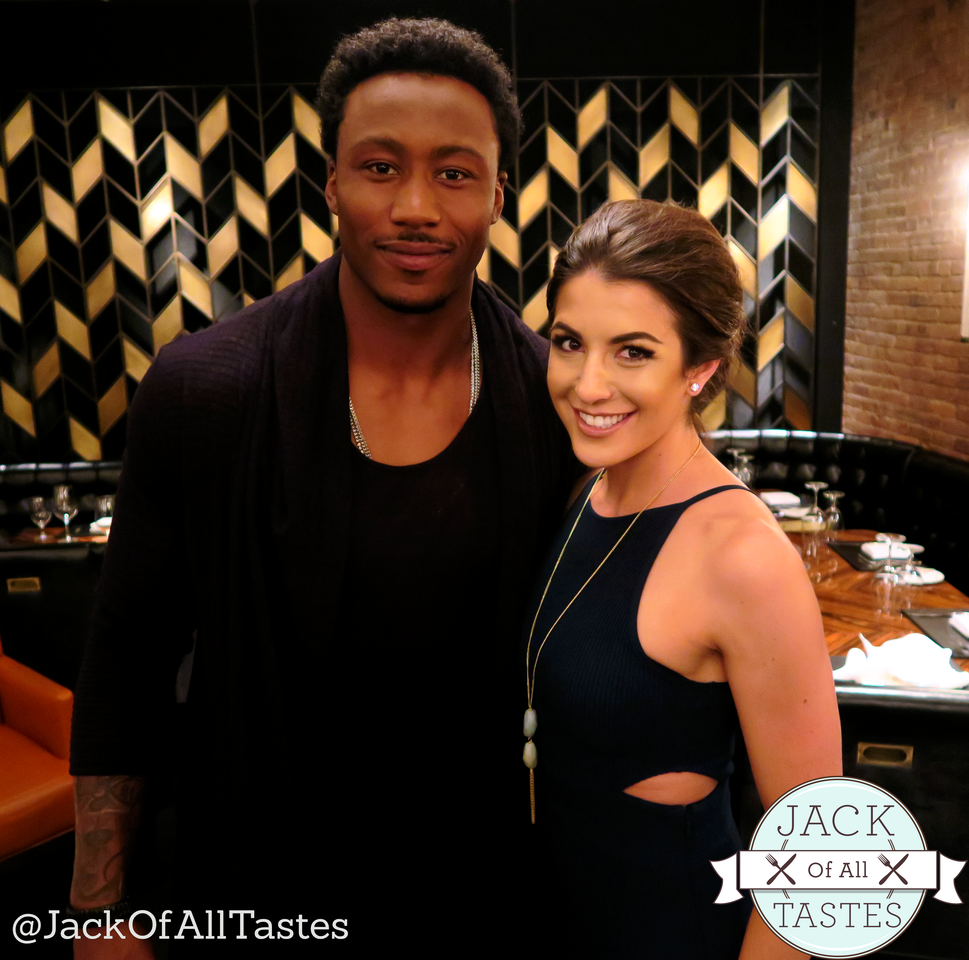 Was having your own show an idea that you had been mulling over?

The concept and name had been in me for a while. We shot the pilot in January of 2013 when Jake was a free agent and then we got pregnant that year. After having Juliette I wanted to take a break from it all and just be a mom for at least the first year of her life.  June of 2015, Max from Accord Productions called me and said, “We’ve been shopping the pilot around and are getting a lot of interest, do you still want to do the show?” Accord partnered with another production company called Dolphin (no relation to the team, HA!) and we started filming. 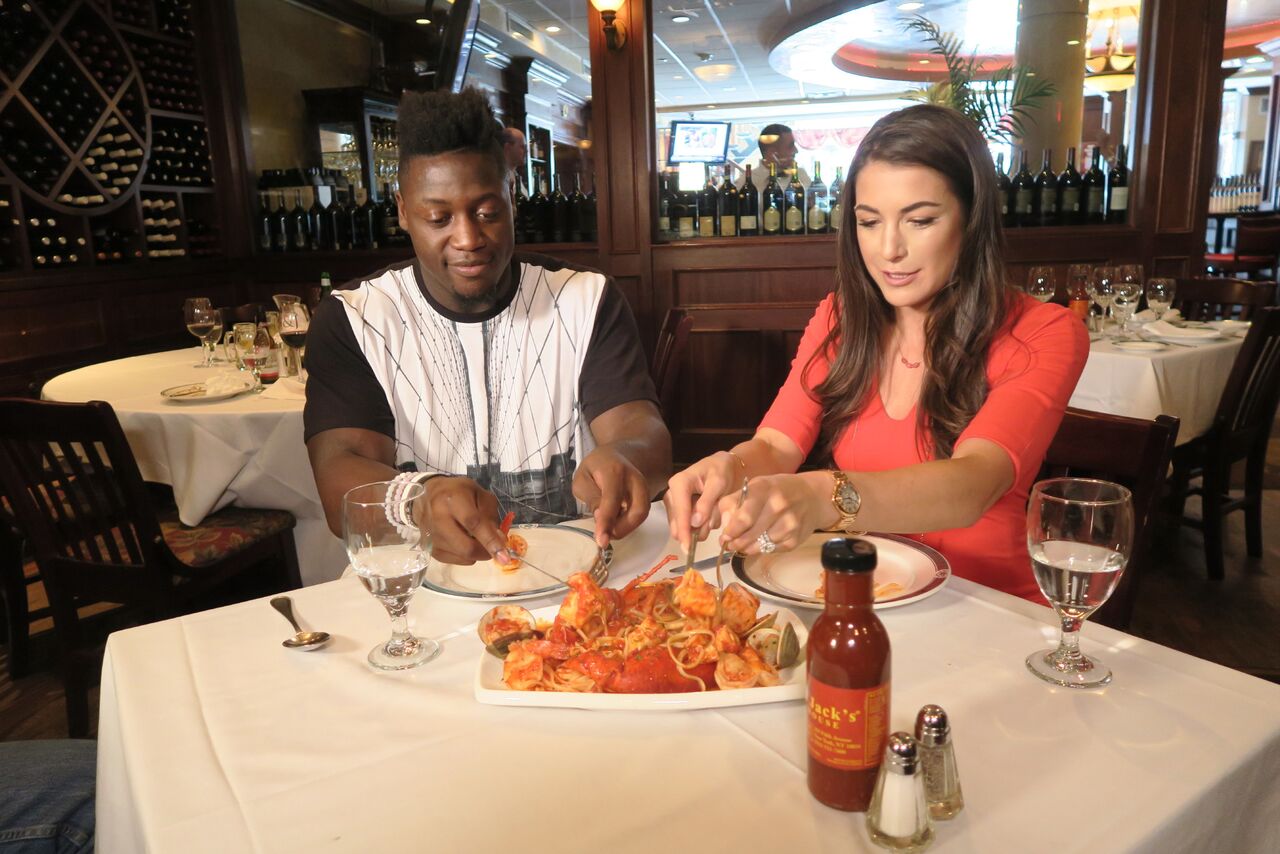 What are your long-term dreams and goals for the series?

Long term for the series, I really want to paint a picture of the pro athlete in an approachable way. The access the show provides our viewers shows a more human side as opposed to the “Gladiator” that fans normally see. I want the viewers to also see the personal dynamic with the most incredible women who stand alongside these guys throughout their careers. They talk about their kids, their families and it's just like sitting down with them and having a meal. I want fans to get to see that there is so much more to these guys than what they see on the field- they are human beings with outside interests apart from football. So many have culinary aptitudes and like to dine out and be experimental with their cuisines. I would love to see the show expand into other sports like baseball and hockey. It would be so fun to film somewhere exciting like Europe or South America and cover other sports abroad! 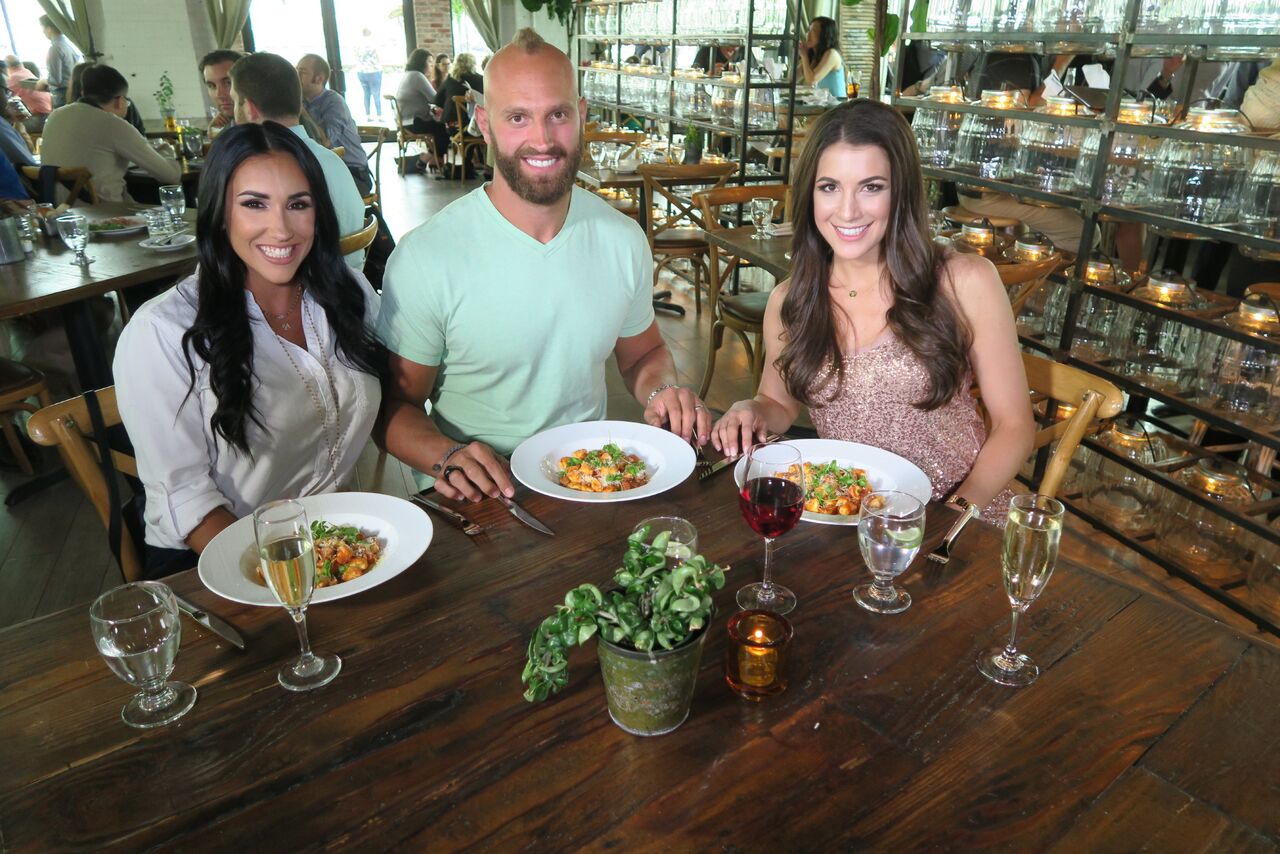 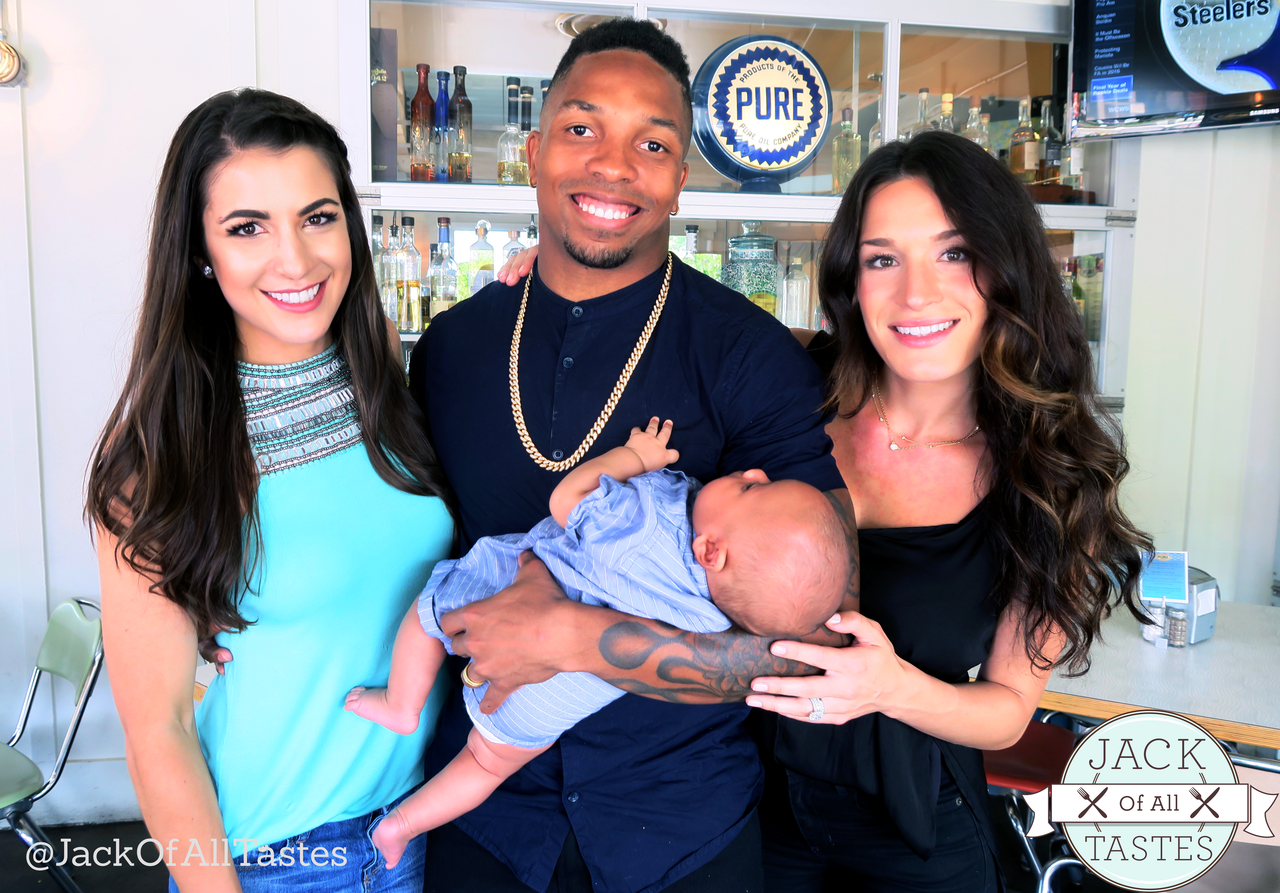 What’s next and what is big picture for your brand?

I had a blast eating all over the country and meeting cool people. I just want to show the world that there is more to these athletes than “just” warriors in football helmets. These are guys who are funny, normal and interesting people! The same goes for the women. There is a lot of pressure on women in sports who are married to or dating athletes to keep up. A lot of us are normal girls making our way through life while our husbands just so happen to have a job that millions of people watch. In reality, we are all just real people trying to figure out this crazy life. During the show, we give the guys the opportunity to talk about their charitable interests and foundations as well, which I love. Big picture? I want to be happily married with my family and love my job. Once I don’t love the job anymore, I’ll pass the torch. 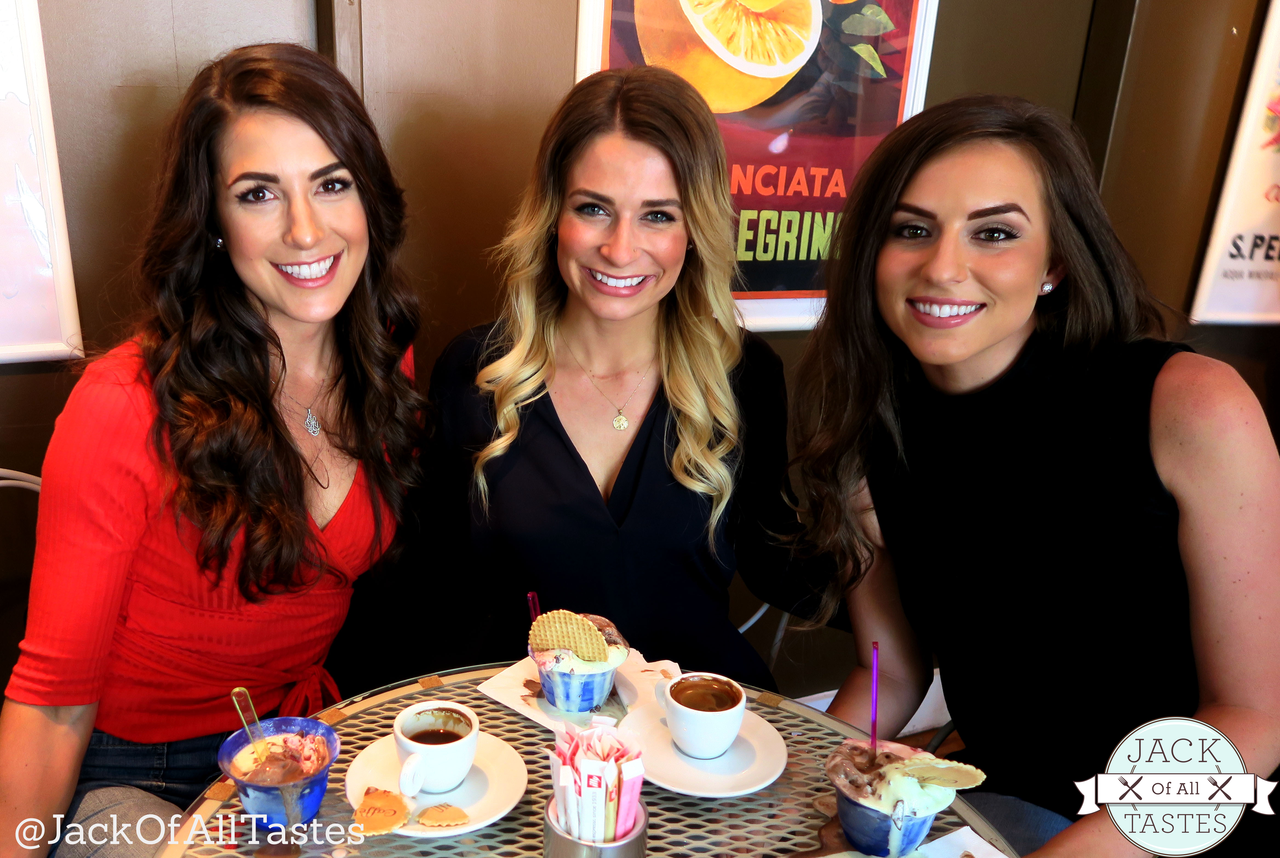 How impactful was the support of your WAGS community while filming Jack of All Tastes?

This first season, I called on a lot of our friends and everyone has been so wonderful and enthusiastic about it. I appreciate the love we are getting from the WAGS community. You are my peers and I want to represent you well too. What I tell potential guests when we are talking to them about what to expect on the show is that there is NO drama-- just good food, good conversation and a lot of fun.

And THAT is the epitome of WAGS Redefined!

Editor's Note: Tune in to "Jack Of All Tastes" Season 1 premiering Saturday, September 9, 2018 at 9AM EST on Destination America.