This week's WAG Feature Wednesday is with Geeta Bishop, the amazingly talented and intelligent wife of NFL Super Bowl XLV Champ, Desmond Bishop. Geeta and I connected because of our similar entrepreneurial mission (which we discuss in the interview). She is the creator of The Better Half, a Wisconsin-based talkshow featuring the better halves of the Green Bay Packers. She also wrote and self-published a book with her husband called Life Actually. The two recently had a son and we have plenty of adorable photos to share! Look out for Geeta and all her big plans for the WAGS community. Read the interview below... 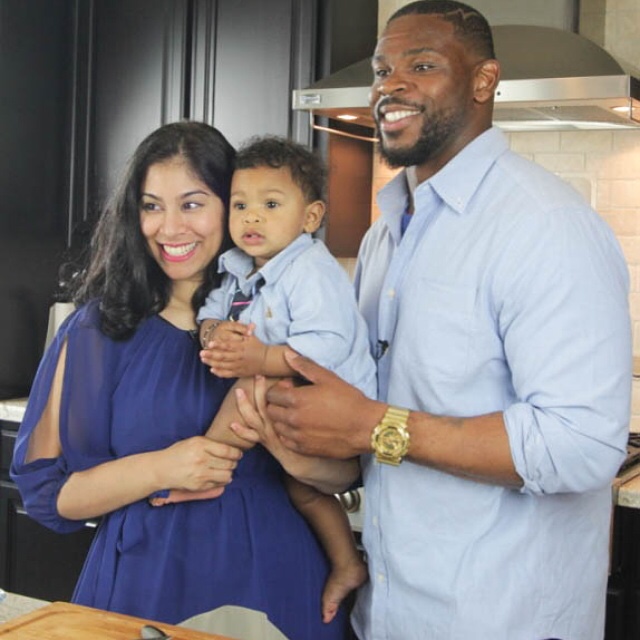 Husband is Active or Retired: Active

Tenure in the NFL and Teams: This will be our 9th year. Drafted to the Packers (6 years), Vikings, Cardinals, 49ers

Music on your playlist right now: I’m really into Priyanka Chopra who is the star of Quantico. She was Miss World 10 years ago and is a huge Bollywood star.

Hobbies: I don’t really have time for hobbies at the moment.

Interesting Facts: I’m the first in my family to marry outside of my race. LM: I started reading your book Life Actuallyso I'm learning of your upbringing. Tell the readers where you’re from and a little about your childhood.

GB: I’m from California. I was raised in a super strict and sheltered household where you had to get straight As or you would be in trouble. My parents were immigrants from India so their life goal was to make sure their children went to great schools and were successful. My siblings and I all went to UC Berkeley. I was President of my high school class and so were my brothers. My siblings and I were all Rally Commissioners. I didn’t even date anyone until I met Desmond. I liked other guys before him but I was scared to date.

For several years, I was super secretive about who I was dating. For one, it wasn't ideal that he played football. There's such a stigma that athletes are bad. What you see in the media is that these athletes are not good guys. It took a long long time for my family to see where I was coming from and who Desmond was. They wanted me to marry a nice Indian guy who understood the culture. It took them a long time but eventually they came around and now they love Desmond! You can’t meet Desmond and not love him. He’s seriously one of the greatest human beings alive. He’s the best dad!

LM: Give us the details on how you and Desmond met.

GB: We attended the same high school in California and met the last day of our senior  year. He had seen me at the Senior Award banquet the night before and saw that I had received numerous awards and scholarships. He approached me and said, “Can I shake your hand because you had a lot of awards last night?” I responded, "Do you play basketball or something?" because he was so tall. He told me he played football. After we exchanged a few words, I told my friend, "I think that guy likes me" and she responded, "There’s no way he likes you. He's a big time football player. He's like famous.” I dropped it and didn't think about it any further.

At graduation, we ended up sitting next to each other because of our last names. After graduation, I went to grad night and he went too. Every time I turned around he was right there! He kept trying to talk to me so I finally said, “I’m sorry but I’m going to Berkely. I’m not interested.”He even had his friend try on his behalf: "Give my guy a chance. He really likes you." The funny part about this was that the friend who approached me used to bully me in junior high. I thought, "Desmond hangs out with this guy? There's no way I'm talking to him." I told his friend, “Tell him to come talk to me himself.” 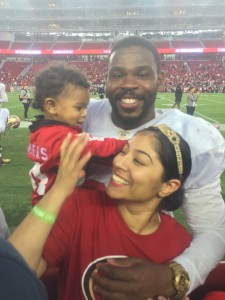 When Desmond approached me, I repeated the same story: “I’m just not interested in dating guys.” I was really focused on my future at Berkeley.

He went on a search to find my phone number. I found out that my best friend gave given him my number. She was in our wedding. I was so mad at her at the time for giving him my number and she said, “Why? He has a girlfriend!” I called him and said I would tell his girlfriend. He pleaded with me and said they were no longer dating. After I heard that I never wanted to speak to him or have anything to do with him again.

Fast forward to the summer. I was taking summer classes to prepare for Berkeley and he was in the same class to make up credits. I would see him everyday but not talk to him. Then he started handing me poems everyday. One day, he handed me a CD and told me to listen to it. It was a song he made called "Someone To Love" and it ended up being our first dance song at our wedding. After that, we started talking and eventually dating.

To this day, we have a running joke about how we met. He claims I was into him first but everyone knows it was the other way around! 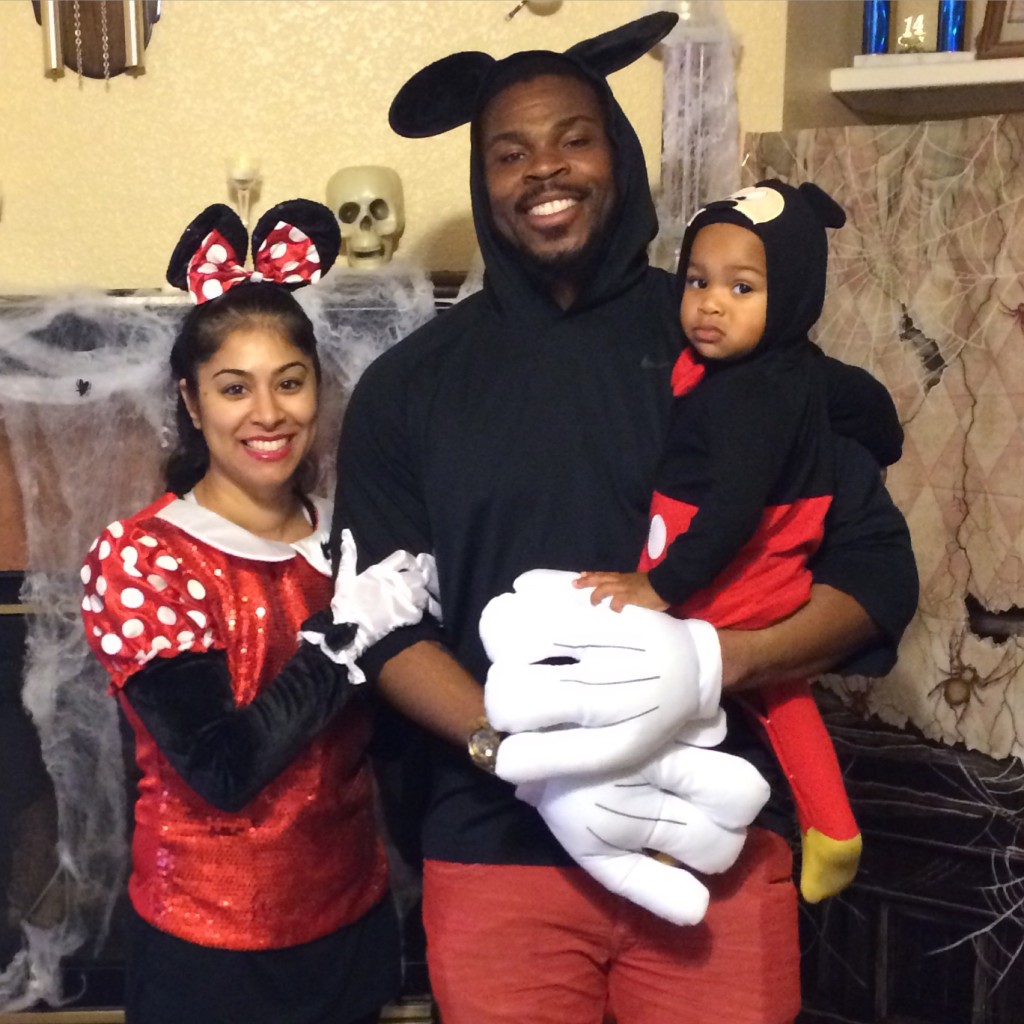 LM: You're a new mom! How has motherhood changed you?

GB: Man. I can’t even look at the world the same anymore. I worry, love and care so much about this little human that has barely said words. It’s difficult to explain in words how we feel about this little boy. We had a tough time gtting pregnant and I had a miscarriage previously so we consider him our angel! There’s nothing better than being a parent. 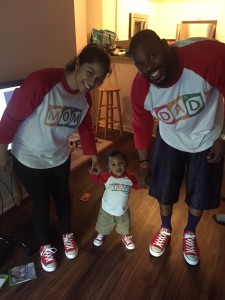 LM: Talk about your mission as an entrepreneur?

GB: My mission as an entrepreneur has always been to do right by others. Why not feel good about what you’re doing and empower each other to be better! Imagine if all the women in the world supported one another rather than acting as competition. Instead of adopting the attitude "I'm better than you" or "I created this therefore I know more than you," how about supporting each other? Indian women have reached out to me because I married an African American man. It’s a tough road in our culture to date outside of our race. They'll message me about that and ask for advice. The clothing line I’m in the process of creating, Mini Me, will donate 50% of the profits to charity. It’s not about the money. Everything I do is based on empowering others.

LM: What is the most satisfying thing you have accomplished to date?

GB: My son! He's everything! He's my husband and I combined. 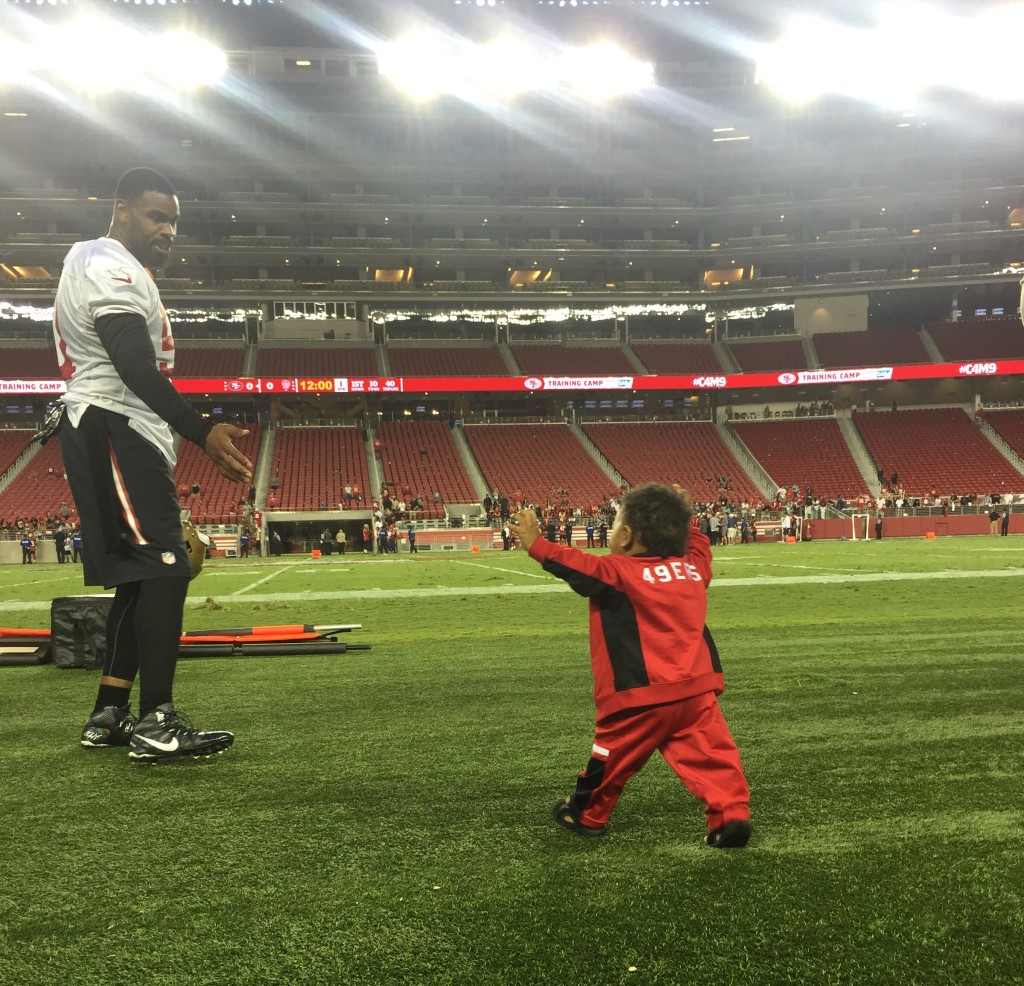 LM: What has been the most challenging part of being an NFL wife?

LM: What about being an NFL wife gives you a life perspective unique to other women?

GB: My answer is two-fold. It’s different because we do have to allow our guys to put something before us in a lot of ways. I remember to this day that Desmond had a game when I miscarried. He didn’t have to but I wanted him to go to the game! There was nothing for him to do at home; I could handle it. Women are strong enough to handle any challenges God puts in our path. 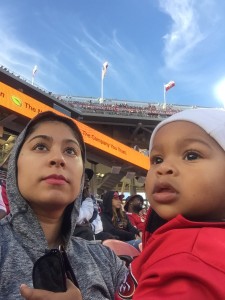 LM: What do you hope will come out of your experience as an NFL wife?

GB: There’s nothing I hope will come out of my experience. I just really try to support my husband. That in itself is huge. Most people don’t even get to the professional level. My husband has been playing almost a decade.

LM: Tell us about any upcoming projects you have.

GB: I’m working on taking my show The Better Half national. I’m in the process of developing my clothing line Mini Me. We also have a burger spot we’re trying to open in San Francisco. My husband grew up in Bayview Hunters Point, a lower income area that is becoming gentrified. We’re taking it upon ourselves to give something great back to the area.

I’m also really into making my own products. I'm Indian so I have many home remedies. For example, my son had an ear infection one time and I didn’t want to give him the ear infection medicine because I have read bad things about it. My mother told me to fry garlic with mustard oil, let it cool, and put it in my son’s ear. I followed her instructions and when we returned to the doctor a couple days later, the ear infection was gone. This inspired me so much! I want to create products like organic diapers and shampoos (similar to The Honest Company). These are just things I enjoy doing.

LM: Where can the people find out more about you/follow you