Meet Nina Thomas. Wife to Seahawks six time Pro Bowler Earl Thomas, mother to Kaleigh, NOLA born and bred, quintessential Southern Belle, and possibly related to Beyonce (“her Mama and Daddy Louisiana” so you never know). Most significantly, Nina radiates love and light and we can see why her husband-her King, made her- his Queen. 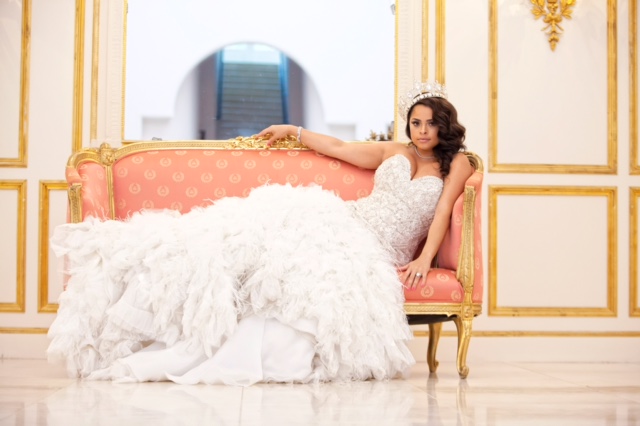 Tell us about the wedding.  We’ve heard it may have been the “Wedding of the Year!" 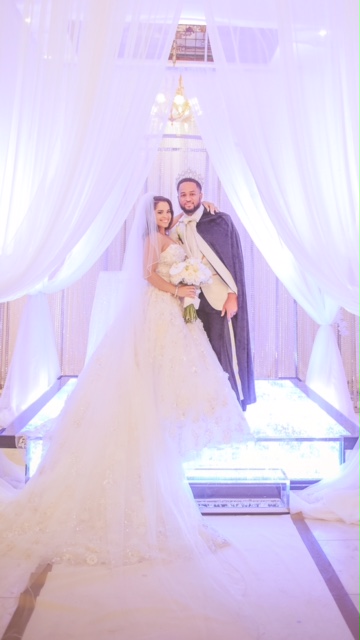 It was so much fun working with Tiffany Cook. I really enjoy planning events. I mean Pinterest is my best friend (lol). I planned my own baby shower and all of Kaleigh’s birthday parties so I was hands on planning our wedding had a blast collaborating with Tiffany. The craziest part about the wedding was Earl wearing the crown--no one expected that one! Throughout the planning, I always said I wanted to feel like royalty, like Kings and Queens. I actually bought him the Crown as my wedding gift to him. Throughout our entire relationship, he’s always made me feel like the Queen so I wanted to do something to make him feel as special as he's made me. The best moment for me was walking down the aisle and seeing him wearing the crown.

That is romantic and it looks like everyone had a blast!

We partied hard! I mean 'til 3:00 in the morning. I sweat my hair out and had plans to throw on another dress and didn’t –we literally had so much fun! Most weddings the guests leave after dinner but we kept telling people there was more. We had calls the next day asking, "Why didn’t you tell us there was more to the reception?” We wanted our guests to remember the evening as the best party and have the most amazing time.

Where are you from originally and how did you get to where you are now?

I am from Nola, born and raised. I ended up in Orange, TX due to Katrina. I finished my last two years of high school there. Earl and I both went to the same school and started dating the end of our junior year. After graduation, he went to the University of Texas and I went to a community college in Austin. I always say that one of the most distressed times in my life ended up placing me exactly where I was supposed to be. For that reason, I am thankful for Katrina (in a way).

How did you and your husband meet? What’s your love story?

We were high school sweethearts. We made it through college and now through the league. We dated for 10 years before we were married. I tell people that and they are like Geesh! That's a long time but we were kids when we first met and over these years we’ve literally grown up together.  I always say that the majority of our grownup relationship was when we moved to Seattle because we were away from our family and living together; the proposal came right on time because we had already spent what felt like a lifetime together.

What was the adjustment like from Texas to Seattle?

When we arrived in Seattle it was a completely different vibe from being in Texas or The South. The weather, food, and people were different from what I was used to but I have grown to LOVE Seattle--it's our little hidden gem. Coming to the Seahawks was an adjustment for us. Leaving college where we were undefeated and playing in the NFL was so different. To be honest, I didn’t know how to handle him coming home after a loss! We were used to winning. I believe all good things come with time. It's been such a blessing to witness Earl play in two Super Bowls, be selected to the Pro Bowl six times, and consistently make the playoffs the past few seasons! The respect and recognition we get as a team speaks volume to our growth. You can’t even talk about defense without mentioning the LOB (Legion of Boom), and I am very proud of my husband and his teammates!

What are some of the challenges of being married to an NFL player and what do you like about it?

The biggest challenge is stability. During offseason it's great because we’re traveling and get to do all these amazing things and see so many new places but it gets to a point where you get a little tired of living out of a suitcase. I am always excited about getting back to the season, getting back to a sense of normalcy, and getting Kaleigh to bed on time (lol). Offseason is fun for us-- from Earl’s camps, appearances, vacations, etc.-- it can be tough to keep up with us. I had to become pretty good at juggling all our different times of the year.

What are some of your favorite fondest WAGS memory?

I really enjoy doing the fashion shows with Off The Field (Players' Wives Association). You get to meet other women around the league who are so welcoming and pretty hilarious, might I add. It just reminds me of when I was in college. All my girlfriends and I used to watch The Game so when Earl was drafted, I wondered if I would get a “Sunbeam” package (lol).

You were looking for the weekly wine nights with Kelly and all?

YES! HA. Which was so funny to me looking back. No weekly wine nights but I do enjoy getting together with the girls whether it be for lunch/dinner, a birthday party, or charity events. Superbowl was like a sunbeam convention so the fashion show was a lot of fun to participate in.

What are your goals?

I often ask myself, "What am I passionate about?" Like my mother, I am happiest being a stay at home mom and wife. It's so weird how people try and belittle that decision but nothing fulfills me like Earl and Kaleigh do. I enjoy helping people however I can. I do charity work with the Seahawks women's organization as well as Earl’s annual football camps, and our annual Seahawks and Steaks Dinner event. I also wouldn't mind being more involved with Off The Field. 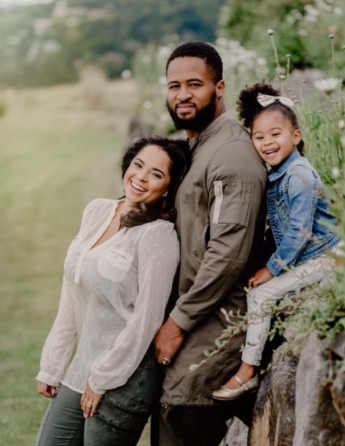 Do you believe there are any misconceptions or stereotypes of WAGS? If so, what is your view?

I don’t like the misconception that we sit at home on the couch drinking wine and eating bon-bons. Dating an athlete is a job in and of itself. We have to be a counselor, we have to keep a home and cook and raise our children. People see these reality shows and get the wrong picture of our lives and what we do behind the scenes. My husband and I live an amazing life but it comes with its own share of struggles. Earl suffered from his first major injury last year; injuries tend to put so much in perspective. The main goal is to be happy no matter what that looks like for you. I’ve realized I can't change these misconceptions but I can certainly prove them wrong.

What do you know now that you wish you knew then?

I wish I knew then to be present in every situation. I know as a woman I get anxious and excited thinking about the future or what's next? Subsequently, I miss out on the things happening right before my eyes. If my wedding taught me anything it was to slow down, relax and LIVE each moment without rushing to think about what's next. You can begin to appreciate life so much more when you stop to smell the roses. Looking back, those little things that I made into much bigger things weren't even worth the time I spent on them. Now I make sure to take everything with a grain of salt and know that If God has brought me to it, he can definitely bring me through it. No worries, Be happy!

Yes. It's a new dimension. We've been married a short time but it gets better every day. You gain a deeper connection than when you were dating. For me, it was a natural progression because I always knew in my heart we would get married, but I never wanted to pressure him. I wanted him to come to it all on his own when the time was right. Last year right before he proposed, I wanted to have another baby “rightaway!” I had been asking so as soon as he proposed he revisited the baby question, but I was ready to plan a wedding then!

What are you passionate about?

I am most passionate about helping others. The past couple years, I have spearheaded an event with the local Ronald McDonald House. I am a Libra woman so I’m a peacemaker, a juggler and a balancer. All my friends know they can call me to do just about anything and I'm all in -- be it a DIY project, advice, girl's night, or planning an event-- they know they can always count on me to make it happen. What's the point of having a great life if you aren't using those blessings to help others in some fashion? So I would have to say that I'm most passionate about helping others, big or small.