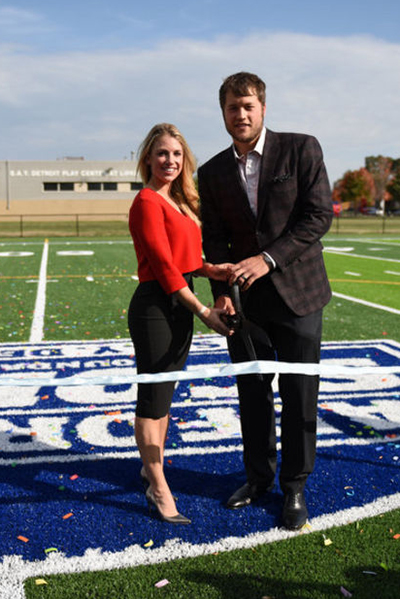 When Matthew Stafford and then-girlfriend Kelly announced their engagement in 2014 before marrying earlier this year, the Detroit Lions community celebrated along with them. The pair has been a mainstay since Stafford was drafted in 2009, establishing a presence within the organization and surrounding community.

After years of supporting various charities and giving back to individuals both publicly and privately, the couple took it to the next step Tuesday, October 19, dedicating a brand new professional turf football field as part of a $1 million donation over the next 10 years. The S.A.Y. Detroit Play Center at Lipke Park is a collaboration with Detroit Free Press columnist Mitch Albom and it is far more than money. It is a promise to engage with kids and continue coming back.

“As much fun as its going to be fun to come out here, get Megatron to come out here and throw some footballs,” Stafford told MLive, "I’m equally as excited for what's going on inside this building and to give the opportunity to help these kids and help them learn."

It's a promise that Detroit needs. While there are hidden gems throughout the city, there are plenty of areas that need more than just a fresh coat of paint. Jeff Seidel of the Detroit Free Press framed it perfectly with dialogue between him and two Detroiters about the Staffords donation.

"This is one of the worst areas in Detroit," said 28-year-old Charles Wilson to Seidel. "I'm gonna be real. I don't understand why there is a $1-million field and renovation and look right here."

"He took one look at this amazing, beautiful, NFL-quality artificial turf field and turned his head and stared at an abandoned, boarded-up house," wrote Seidel. "The juxtaposition was jarring."

Wilson continued: "Listen, it's great that Matthew Stafford gave $1 million. I just don't understand why they built it on Seven Mile and Van Dyke. People get killed around here every day. This is not the best neighborhood."

It's a double-edged sword. For Detroit to make a real turnaround, it has to inject positivity into the worst areas of the city, but doing that puts the investment at risk. Why would the Staffords put their time and money into such a dangerous area of the city?

For any football family, it is clear to see that Matthew and Kelly's outreach is genuine at its core. For a couple transplanted to Detroit — Matthew is from Texas while Kelly grew up in Georgia — this kind of commitment shows where their hearts are at.

Embracing a city like Detroit when your roots lie elsewhere is a true act of kindness they are hoping makes a difference.