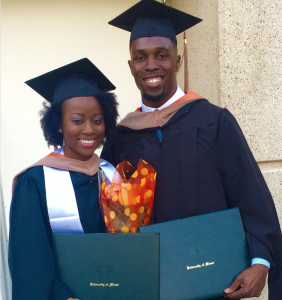 A few weeks ago I graduated from the University of Miami with my Master’s in Business Administration. This is my 3rd degree. Yes I know it sounds a bit ridiculous, but I’m what some people call a career student. I thrive on studying my days away, then complaining and counting down the days to freedom from homework, group projects and exams. I don’t know why I continue to torture myself but for some reason I keep going back. You would think that after earning my bachelor’s degree in journalism from The Ohio State University and a master’s from Texas Tech in Mass Communications I would have had enough of school, but when an opportunity to pursue my MBA degree came along I couldn’t say no to the opportunity to complete more education. Executive MBA for Artist and Athletes:

The Executive MBA for Artist and Athletes at the University of Miami is a program designed to help professional athletes and their significant other or business partner earn their Master’s in Business Administration in an 18-month long program. The program is completed in six 2-week sessions during the offseason and three online classes during the season. To be honest I had no idea what to expect and I was nervous about doing the program since I was only one of two women joining the incoming class. I knew I would have my husband by my side and the classes would be challenging, but I wasn’t sure how a group of football players would be in the classroom. Upon starting class I quickly learned my classmates were a fun group of guys that were extremely focused and had a strong work ethic.

Perception Not Equal To Reality: 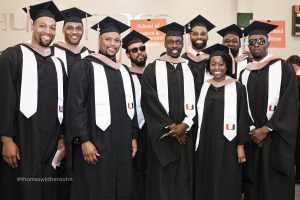 Being surrounded by such a driven group of individuals made me realize the media often portrays our guys in a negative light. All of my classmates were the complete opposite of how we often see football players characterized. The reality is most of them had established businesses and non-profits prior to joining the program and were working towards building legacies that would sustain their success well beyond football. Several of my classmates were and are some of the top players in the league and had reached what some would call the highest height of achievement by making it to the NFL, and yet they still chose to pursue higher education. These aren’t the images we often see so I’m glad I have this platform to show that these guys are more than just football players. They are great fathers, businessmen and leaders who continue to strive for more than the glory of the game and they deserve to be recognized for their contributions on and of the field.

Being in a class of football players I was reminded of how blessed I am to be a part of such a great league but the reality is the NFL is "not for long." The NFL has afforded many of us with the opportunity to build great networks and to travel and experience things that some people only dream of.  Although the ride is often fun, it goes by so fast. I realized the best lesson that I can take away from completing the program didn’t come from my professors or my textbooks, but from the very men I sat next to every day. Their work ethic taught me to go after my passions and dreams, to keep learning and networking and to take advantage of all the resources this league has afforded my husband and I. 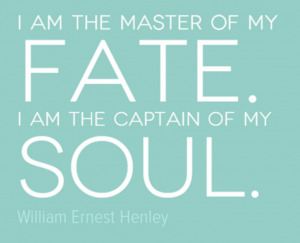 My husband is going into his sixth season and I must admit in the beginning of his career it felt like football would last forever. Now that we are much closer to retirement than we are to rookie season the reality has set in to enjoy it while it lasts but to also get prepared for the day when it will all be over.  For many of us women this may be a little more difficult trying to juggle being a wife or a girlfriend, having families and being supportive to our men, but that’s ok. It’s never too late to start fresh just as long as you start. One of greatest gifts we can give everyone around us is to not give up on our dreams and goals no matter what. For some that means picking up that hobby or dream that was set aside temporarily, for others that means trying something new or challenging or maybe going back to school to earn a degree or two.  Whatever it may be I strongly encourage you to take advantage of today. We do not know what tomorrow will bring but we have the ability and power to impact tomorrow by what we do today.

My MBA program taught me a lot about business but so much more about mastering life. Never stop learning, never stop growing and don’t be afraid to take risks. I hope my journey encourages you just a little to jump in head first and do whatever your hearts desire and if you're already doing so kudos to you!